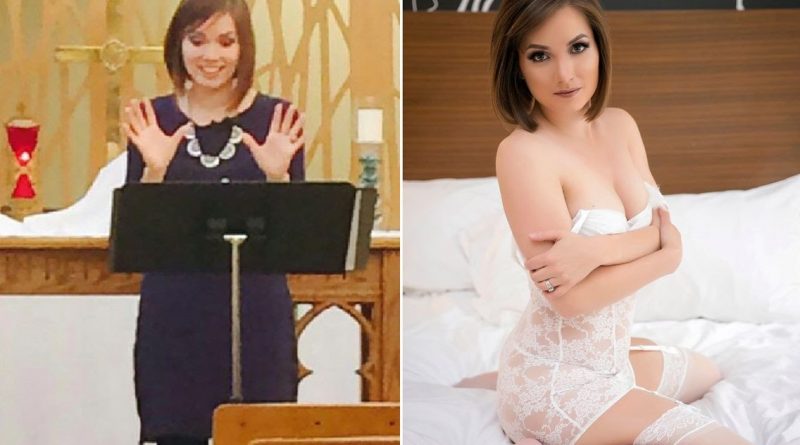 A pastor has given up the church to become a stripper and has amassed thousands of fans who pay good money to see her x-rated photos and videos online everyday.

Nikole Mitchell, mum of three said she always wanted to become an er0tic dancer but was brought up in a strict Christian family which put a damper on her dreams.

According to her, she was ‘indoctrinated to believe her desires and body were innately sinful and bad’.

She has ‘backslided’ and now happily living her dream in a new career as a stripper, model and er0tic dancer.

Nikole, 36 said: ‘I started off really timid like just topless photos, but now I’m at the point where I take personal requests and make videos very tailored to people’s specific desires.’

Nikole threw more on what actually drove her out of church.

First, Nikole said her parents were against her when she got married and decided to become a pastor– a move seen as rebellious in her family’s eyes as a ‘woman’s place was in the kitchen and looking after her children.’

Secondly, she discovered she was a bi-sexual and pansexual, but the church did not provide any form of support for such people.

Nikole began to question her sexuality the more in 2016 after she attended an LGBT-oriented theatre performance.

‘I knew if I revealed my queerness I would lose it all because the church is not welcoming to queer people’, she said.

Not wanting to live a duplicitous life, Nikole left the church for good in 2017, relocated to Los Angeles and divorced her husband in 2019. She says she is ‘happier than ever’.

Think Nikole Nikole will reconsider her decision remain in the church? No way!

She insists ‘every person has the right to express themselves in whatever way feels good to them and this is how it feels good to me…My sexuality is incredibly healing and sacred. And when I give this gift to people, it bless’.

Nikole has officially resigned from the church and now following her true calling. We will keep you updated on her career. Keep your eye on Kasatintin.com.

In a related news, prolific p0rn actress Jessica Jaymes has died at the age of 40. She was found dead in her home in California on Tuesday. CLICK on this link to read the details + photos.

What A SURPRISE! Countryman Songo Ordained As A PASTOR (See Video)